Pepsi is attempting to embark on the TikTok...
HomeSportCricketIND A vs... 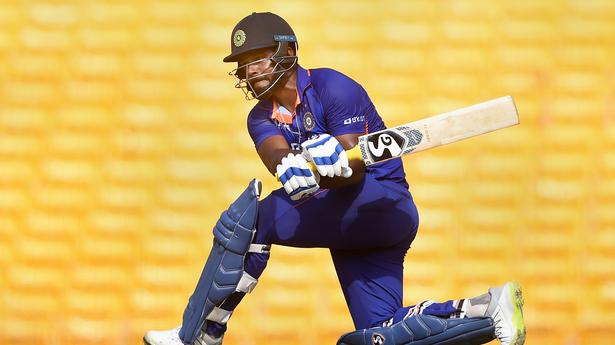 Welcome to Sportstar’s coverage of the third ODI between India A and New Zealand A from the MA Chidambaram Stadium in Chennai.

TOSS: India A won the toss, opt to bat

Live visuals have Kuldeep Sen, Umran Malik and Shardul Thakur bowling on the side-strip. Seems like India A is going all-out once again after the first match.

India A skipper Sanju Samson and head coach VVS Laxman are the first to enter the field. They have a good look at the pitch and have a quick chat before proceeding to the warm-ups.

India A beat New Zealand A with a tricky four-wicket triumph in the second unofficial One-Day at the MA Chidambaram Stadium in Chennai on Sunday.

Kuldeep Yadav’s hat-trick and a chase, replete with thrills and spills, ensured Sanju Samson’s men took an unassailable 2-0 lead in the three-match series.

Chasing New Zealand’s 219-run total – a marginal improvement from the first match – India A was off to a blazing start with Prithvi Shaw’s quickfire half-century. A middle-order collapse meant that the lower-order all-rounders Shardul Thakur (25 n.o.) and Rishi Dhawan (22 n.o.) had to intercept and save the day.

After crumbling to 27 for five inside the PowerPlay in the previous match, NZ skipper Robert O Donnell remained confident as he chose to bat on a fresh strip. Sanju Samson’s side fielded three changes with Kuldeep Sen – the wrecker-in-chief in the first match – being replaced by all-rounder Raj Bawa. Rahul Chahar and Tilak Varma also received a place in the XI.

In Sen’s absence, Umran Malik was promoted from first-change to open the attack alongside Shardul Thakur. Featuring in just his third List A match, Umran showed signs of improvement when he began his spell with a maiden. Kiwi opener Chad Bowes struck three boundaries inside the first six overs but eventually slashed one to Tilak at point off Umran for 15. Skipper Samson took to spin in the ninth over with leggie Rahul Chahar. Chahar struck almost instantly as he dismissed Dane Cleaver for 9.

The situation opened doors for another collapse before Joe Carter and Rachin Ravindra salvaged a response. While Carter dropped anchor, Rachin took on the bowlers with occasional boundaries across the square. The southpaw breezed to his fifty in 53 balls as New Zealand crossed the 100-run mark in 21 overs. However, India struck back in the space of three balls in the next over.

New Zealand undermined Dhawan’s uncanny lines and paid the price. Dhawan cramped up Rachin on 61 when he attempted to cut and found Ruturaj Gaikwad at point. Skipper Robert O Donnell fell for a two-ball duck as he dragged one onto the stumps with Dhawan completing a double-wicket maiden.

Meanwhile, Carter trudged at the other end as he lost Tom Bruce (10) and Sean Solia (28) to Bawa and Kuldeep within the next 10 overs. Carter struck his first boundary – a six – to move into the 40s. With wickets tumbling at the other end, Carter loosened up to hit two more maximums against Kuldeep before Chahar eventually dismissed him for 72.

Umran was effective in the brief spells during the middle phase as he registered figures of 8-1-34-1. He was conscious of keeping the ball away from the shorter lengths and proved to be difficult for the batters to deal with.

With Shardul proving ineffective in his second and third spells, Samson resorted to Kuldeep towards the death. The left-armer deceived Logan Van Beek with a slower delivery that took the leading edge to Shaw at cover. Joe Walker was caught behind by Samson as Kuldeep went full and straight to find the outside-edge next ball. The 27-year-old Kuldeep, who has been in and out of the national side in limited-overs, capped off a hat-trick as he skid the ball through length to trap Jacob Duffy and bundled New Zealand with the last ball of his spell (4/51).

With two packed stands of raucous spectators in sight, Shaw and Gaikwad put on a blitzkrieg that dazed the New Zealand bowlers after the lunch break. Shaw sped off the blocks with a swivel-pull for four in the first over from Duffy. Gaikwad got into the act in the second over when he flicked Van Beek through mid-on for four. The pair raced to a 50-run stand in 37 balls with Shaw acing a one-handed six over mid-wicket against Solia.

The Mumbai batter pummeled every bowler that came along and notched up his fifty off just 26 balls with another six. New Zealand received a breather when it dismissed Gaikwad for 31 but that did not deter Shaw, who upped the ante with Rajat Patidar. Shaw, who racked up two centuries in the Duleep Trophy over the last two weeks, looked set for a List A century before being caught flailing on 77 off 48 deliveries and triggered concerns in the Indian camp.

After bearing a pounding in his first spell, Duffy returned with a clear tactic to strangle the top-order filled with right-handers. The right-armer came around the wicket with a short-ball ploy to Patidar who was threatening to take off after hitting three boundaries. Duffy sent Patidar packing with a surprise bouncer that flew off the top edge to the square-leg fielder.

Duffy then dismissed Tilak Varma for a golden duck in his next over as the batter tapped a fuller ball from Duffy down the leg-side to the keeper. Meanwhile, Samson who had walked in at 4, survived a streaky top-edge of another bouncer that skipped the keeper in the same over.

Samson weathered the storm briefly as his stroke-laden knock led India towards the 200-run mark. Van Beek, who took a leaf out of Duffy’s methods, then sent in a barrage of short balls to Samson in the 26th over. While Samson pulled one to the square-leg fence for four, he was deceived by a slower bouncer that angled away. Samson’s (37) mistimed pull was grabbed by an excellent full-length dive from Bowes at square-leg. India soon fell into a spot of bother when Van Beek bounced out Bawa for a duck in the same over.

However, Dhawan, who had a muted stand with Samson, carefully led India over the line as Shardul added the final touches with a six and a four in the 34th over.

Where can you watch and follow the India A vs New Zealand A ODI series?

The India A vs New Zealand A ODI series will not be telecast or streamed online. You can follow all the live updates from the venue through Sportstar’s live coverage and blogs.

Bernie Ecclestone Claims That Formula 1 Fans Should Be Grateful to...

Red Bull: Mick Schumacher ‘wasn’t interesting for us’ as a third...