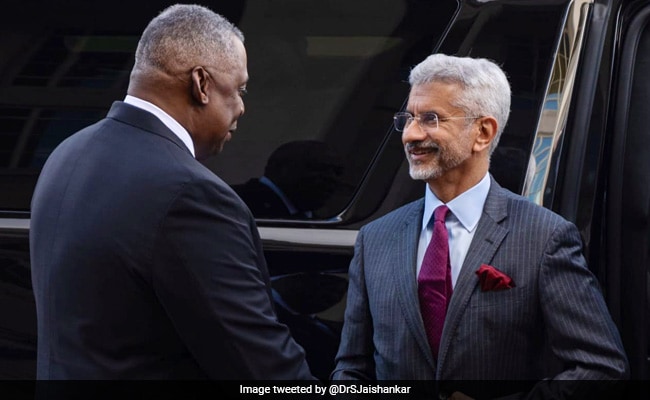 A video clip shared by news agency ANI shows Mr Austin hosting an honour cordon and receiving Mr Jaishankar as he arrives at the Pentagon, the headquarters of the US defence department.

In opening remarks, the US Defence Secretary sharply criticised China for “unprecedented provocations in the Taiwan Strait” and said India and the US are working together toward a brighter future for the Indo-Pacific.

This comes against the backdrop of Mr Jaishankar’s sharp remarks on the US pace with Pakistan to provide F-16 fighter jets.

Addressing an event in New York, the External Affairs Minister has said Washington’s ties with Islamabad did not serve the “American interest”. “It’s a relationship that has neither ended up serving Pakistan well nor serving the American interests,” he said.

In his remarks, Mr Austin said, “The United States In India, along with a dozen other Indo-Pacific partners, pushing to expand our region’s prosperity for the Indo-Pacific Economic framework.”

Mr Jaishankar responded that the “ripple impact” of the India-US defence cooperation has a “larger beneficiary implication”. “Indo-Pacific in particular, it’s important that the stability, security and prosperity of the Indo-Pacific should be secured, which is best done amongst others by cooperation between our two countries,” he said.

Mr Austin targeted China for supporting Russia’s invasion in Ukraine. “China continues to support Russia amid its unprovoked and cruel invasion. So we face sustained challenges to peace, security and prosperity in the region and beyond,” he said.

Assuing Mr Jaishankar on US’ commitment towards India, he said, “As a minister, I’m grateful for your friendship. And we work together toward our shared vision of a free and open Indo-Pacific. And I look forward to a great discussion.”

The Pentagon Chief also recalled his recent call with Defence Minister Rajnath Singh and said the defence partnership between India and the US is getting stronger.

Pleasure to meet @SecDef once again.

Defence and Security cooperation is a key pillar of the contemporary India-US partnership. We noted the steady progress in policy exchange, interoperability, defense trade, service exercises and military-industrial cooperation. pic.twitter.com/9AkvTkALGk

“I’m delighted to host you at the Pentagon today, especially following my recent call with Defence Minister Rajnath Singh. These conversations reinforce a growing threat and ambition of our partnership. And that partnership is moving from strength to strength. Today, we are positioning the US and Indian militaries to operate and coordinate more closely together than ever,” he said.

India has flagged its concerns after the Joe Biden administration approved a $450 million F-16 fighter jet fleet sustainment programme for the neighbouring country.

In response to a question on Mr Jashankar’s remarks on the programme, the US State Department spokesperson Ned Price told the media, “We don’t view our relationship with Pakistan, and on the other hand, we don’t view our relationship with India as in relation to one another. These are both partners of ours with different points of emphasis in each.”

India signals it will continue to buy oil from Russia