EU and US consider further sanctions on Iran over protest crackdown

A general view of the Bombay Stock Exchange (BSE), after Sensex surpassed...
HomeLatestRace for tickets... 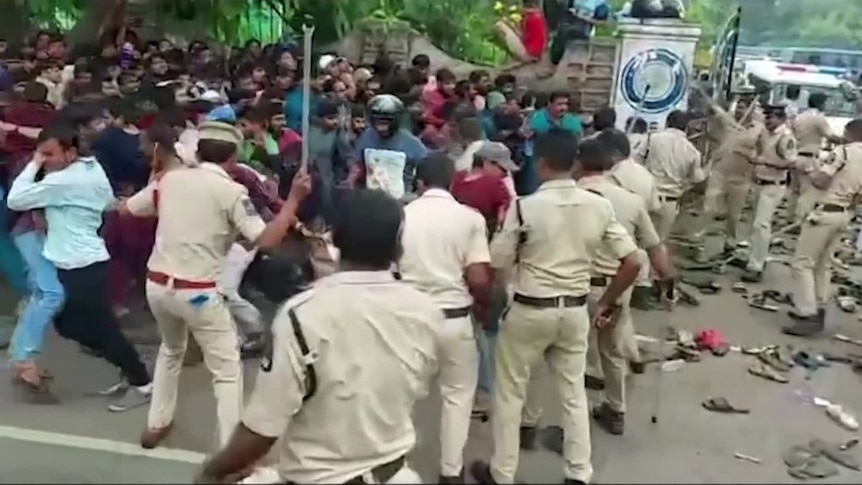 Twenty people have been injured in a stampede in southern India, with police saying thousands of fans thronged counters where tickets for a Twenty20 cricket match against Australia were being sold.

The crush of cricket enthusiasts happened as the tickets went on sale at three counters at the Gymkhana grounds in Hyderabad, the capital of Telangana state.

Nearly 30,000 people had spent hours waiting in long lines for only 3,000 tickets for Sunday’s match.

Police used batons to try to control the crowd.

“I came at three in the morning for the tickets and I am going home empty-handed without tickets,” Gopal, a cricket fan who goes by only one name, said.

“I don’t know how the HCA (Hyderabad Cricket Association) sold 3,000 tickets so soon.”

Seven of the 20 people who were injured were hospitalised in a serious condition, a police officer said on condition of anonymity as he was not authorised to talk to reporters.

Many people were bruised and lost shoes earlier in the day, but they refused to go home without tickets.

India is hosting Australia in a three-match T20 series in preparation for the T20 World Cup in Australia next month.

Who holds the record for the most runs on...

EU and US consider further sanctions on Iran over protest crackdown